The Missing by Karl Vadaszffy
My rating: 4 of 5 stars

Well this is a book with a mixed bag of reviews on Amazon UK: some slate it, some praise it: some are downright insulting to the author.

I rather liked it.

Be under no illusions: this is not a pleasant book; it is about a serial killer who focuses on women. They tend to be nasty characters that do nasty things to women. I had to laugh at one reviewer who decries the violation of women as portrayed in this book, and another who criticises the lack of loving sex. Hmm, if only twisted serial killers converted to indulging in loving sex: they’d all be cured.

OK, the police procedure is not realistic, but then who believes that Morse, Frost or many other fictional detectives are realistic? This is a work of fiction. Live with it.

In reality, there would be a specialist squad investigating the killings but, as with those other top ’tecs, DS Kate Neilson is on her own. Did the elusive Jennie ever exist, or is the sadly lovelorn John Simmons deluded about her existence and killing all these women? Or is the killer a fellow detective (the DCI has issues)? What is the involvement of the Wongs?

The first half of the book moved at a reasonable pace, the second half thundered along. Not all of it was to my taste, but I did enjoy it overall.

I don’t disbelieve the earlier reviews that mention many typos and errors, but I didn’t notice more than a couple, which means either I’m half blind, the story was good enough to make me not notice them, or they’ve been corrected.


View all my reviews
Posted by K J Bennett at 17:09 No comments:

In a change from the usual ‘me me me’ kind of blog post, today I am really pleased to welcome two guests to Bennett Towers. 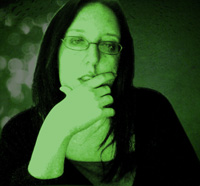 First up is the wonderful Miss Anya Breton. 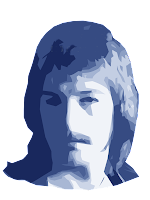 My second guest is far less distinguished. Born in 1955 he still only 24 years old and should be singing his heart out in the late 1970s. However, he crossed a ruthless biker gang, became embroiled in a drug smuggling racket, was entrapped by the Greek secret police and the KGB, and was used as a guinea pig in a quantum experiment sponsored by a Greek drugs baron. Nothing out of the ordinary, then. Oh, did I mention that he may have murdered his father? No? How remiss of me. You can read his tale in RathboneKydd – sex’n’drugs’n’quantum stuff.

So, here to interview Anya Breton is Mr Rathbone Kydd.

RK: Thank you, KJ, thank you. It’s kind of you to have me here today, and I see you’ve lain on a hot chick for me to get my teeth into. Lovely. Er, so, er, Anya, chick: I hear you write that erotica stuff, eh? Wanna tell be about that?

RK: Sorry, babe, I was just examining your assets there. What’s the name of the new book you’ve been hand-writing?

AB: [adjusts her top so it covers more] Alpha Exposed is the next book due out.

RK: So what’s the plot, assuming is not just about the sex? Not that there’s Anya-thing (tee hee) wrong with just the sex, know what I’m saying, eh? [Drools]

AB: [stares for a moment] The plot is Samantha’s sister is missing. The one person who can help find her sister wants a steep price for his services—sex in public with the only woman to reject him. The only woman is, of course, Samantha. I can’t give away too much more without ruining the plot, but yes, there is more than sex. It is a love story, after all J This love story just happens to feature Air witches and Alpha weretigers. Mmm, Alpha weretigers [goes glassy-eyed]

RK: Wow! Rejection. Must be a real bummer. I sorta sympathise with that guy. Hell, who am I kidding? He’s a loser. Rejection? Never happened to me. So ... air-witches: are the like sandwiches with a low fat centre?

AB: [wipes a little bit of drool off her lower lip] He’s actually quite lovely, at least in the end. Yes, Air witches and no, they’re not like sandwiches, unless you know of low fat sandwiches that can conjure tornadoes and speak telepathically. I dunno about you but I’d run for the hills if I came across any entrée that could do that!

RK: I don’t know of any telepathic sandwiches, but I do remember this guy back in Exeter (that’s in Devon, England) in ’78 who had this real bad acid trip and thought he was a sausage. So me and the guys from the band were chasing him round town yelling, “Knife and fork, knife and fork!” Don’t know if he ever got out of the institution, or anything. So how many books have you published?

RK: Hell, that’s way more than KJ. Guess you make him feel inadequate. Quite right, too: he is.  So you’re a millionaire authoress who writes sexy books and looks hotter than a very hot thing? Wow. I’m in lurve...

AB: [snorts] Millionaire, nah. I still have to work a day job. As far as the second part there, considering some “very hot things” I’ve seen, yeah sure, I look hotter than a pizza burnt to a crisp.

AB: This book? Maybe parts. A big portion of the plot has to do with the supernatural so, in that aspect, no you can’t get into the situations for real. In my Randy’s Diner series, I suppose you could get into those situations for real if someone created a naughty diner like that. By the way, the idea is available for franchising ;)

RK: See, I thought it was all unreal, ’cos there’s no way guys can even talk to girls in most cases when they all have those music players – erm, pPods? – stuffed in their ears. Got any good tips to get over THAT obstacle?

AB: Are you asking me for advice picking up chicks?

It’s just that music player stuff. I mean, I went to a pub the other night and met this real cool chick – sleek and slinky, thick brown hair, a real babe. After a few drinks we ended up at her place, and she wasn’t really a conversationalist, y’know? I mean, I can handle myself in most situations so it didn’t matter too much, but she had these, erm, these m-pod-3 earplugs things in the whole night and it’s kinda off-putting, especially that tinny over-spill when she turned up the volume right at the moment of glory. I mean how the hell’re you s’posed to get those things away from a chick? Call me old fashioned, but I like at least some chat – not necessarily dinner and a show, but “thanks for a good time” would be nice. All I got was a chorus “Umbrella-ella-ella” and a slammed door.

AB: I hope you promptly lost her phone number.

Still, enough of this stuff about my very active sex life: tell me about yours. Oh, hang on. KJ’s just passed me a note. Hmm, it says, “Ask her about the real Anya Breton – who she is, what she likes, what makes her tick ...” Wow, that’s deep. Didn’t think he was like that.

So, tell me about the real Anya Breton.

Um, I’m a goofball and a nerd. I like loads of things. Oh, for example, I’m an Apple fangirl. So I love those iPods [emphasizes the “I”] Remember when if you wanted to carry 5000 songs around with you, you’d have to have a lorry? Now you just need one of these thin little babies with the pretty colour screen. [holds one up and strokes it]

Is Anya Breton your real name, or a gnome-dee-ploom, or whatever the fuck spelling that’s supposed to be?

RK: You’re a tough cookie, you know? Maybe I should ask more direct questions, ’cos you just confused me there. Is it an assumed name?

AB: Anya is my nickname. I started using it in high school. Breton is not my surname but it is my family’s name. It’s a long story that isn’t amusing. Trust me when I say you don’t want to hear it ;)

RK: I know what you mean about those name problems. I mean, keep it just between you and me, and promise not to tell a soul, but my full name is Basil Rathbone Kydd. Yee, the crap I had to put up with at school with that name. It was the initials – BRK: bark. They used to call me Fido.

Anyhow ... I hear you have a thing about rubber chickens. Care to explain?

AB: If it helps, I love the name Basil. It’s a respectable sort of name.

RK: I'm not the respectable type.

AB: About the rubber chickens, I was a clown in high school. Literally. But I couldn’t afford a rubber chicken. I’d always wanted one. So when I got a real job, I started collecting them.

RK: So these rubber chickens: not euphemisms for some kinky sex toys in your books?

AB: [laughs] No. But if you like that sort of thing, I suggest reading ‘Clown Girl’ by Monica Drake.

RK: Right. I hear that the ‘Lore’ series is classed as ‘young adult’. Do you get any of your younger readers buying the wrong books and complaining? (Actually, they probably wouldn’t complain, but their daddies might).

‘Time’s Daughter’ is my only young adult book so far (it too suffers from not being professionally edited). So far none of the teens have bought the other books and complained (mostly because that requires buying, and Time’s Daughter is free from most retailers).

I’ve considered a second pen name. If I release any other YA books, I’ll probably do it with a different name.

... And I suppose I’d better rethink the Christmas gifts I was gonna get for KJ’s teenie daughter, then. Oh, and I’d better call for an ambulance. His nose looks broken ... and his leg.

AB: Again? The poor thing! [hands over a bar of fancy chocolate] Make sure HE gets this!

RK: Right, Anya. I suppose we’d better end on a high note. You’ve got just enough time before the medical services arrive to tell me why people should buy your book.

I’m really bad at selling myse…er, my books. I never think they’re good enough. But this one, this is the best one I’ve ever released…so far. It’s a short read, it’s fun, and it’s sexy.

RK: Anya Breton: thanks very much for coming here, and good luck with Alpha Exposed.

AB: I’m always interested in nights of passion…with my amazing significant other. Sorry, darling, I’m spoken for. But you’re a doll. Just keep doing what you’re doing and I’m sure those mPods will fall right out of those ears. [tries to hold a straight face as she gets up] 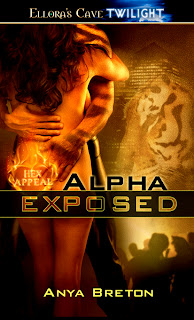 Blurb:
When Samantha’s sister goes missing, all signs point to supernatural foul play. Her fellow Air witches won’t help, leaving her with one miserable choice—to beg for assistance from Dion Hebert, the odious weretiger Alpha she shot down months ago. In front of his pack. What’s a witch to do?

Dion can’t believe Samantha has the nerve to come begging after she humiliated him in front of half the supernatural Underground. He agrees to help in exchange for the one thing he’s always wanted—Samantha Avira. Naked. Wrapped around him in every delectable position he can imagine. But since the witch humiliated him publically, Dion wants the sex to be public too.